"PR PR PR PR FR FRFRFR KKKK HEIHEIHEI CHO TRTRTRTR YEHEHEHE is branching from the Chimera and Aigai_o research, and aims to overlay a lyrical path over the pedestrian route to the summit of Psiloritis. The unpronounceable title originates from Giannisi’s attempt to transcribe a call used by shepherds to command the goats out of the goat-fold. This element of an oral language by humans for animals is indicative of the scope of the chosen lyrical fragments, phrases and quotes that accompany a walker along the path. Those lyrical fragments are put forward on and around the trail to the Holly Cross summit (words put forward -"proverbs" literally). A walker can read or recite those "proverbs" on the way associating the words with the landscape. In this spatialised version of "Chimera" presented in Psiloritis, the walker, potentially coming across the work will be faced with the opportunity to recite the verses and proverbs, contributing lyrically, poetically and musically to the landscape. Lured out of the path following the proverbs, the walker – reader may abandon the path and become a climbing goat, one more chimera."

"Chimera is a multifaceted work of documenting, writing, collecting and re-classifying the resulting archive. Every new form of the work is a taxonomic disturbance of the archive by its own means. The book “Chimera” is also a taxonomic disturbance. Where does the animal -the living- lie, in this exercise of death? the goat is free to climb without addressing the future. On the contrary, documentation is a process that locks a moment into a form separated from the ow of life. For a while, every new repositioning of the archive constitutes the foundation of a new movement, a breath of new life, lasting until the process ends and freezes in its completion. The last episode of this work, which begun with the sound of mountains and of the bells of animals, is unfolding in Psiloritis. The voices of animals and humans are engraved to the ground. Now the earth talks. The reader treading the path later, may read some of the still visible fragments. Reading out loud on the way, a new song will be heard, the song of the road. A poem on the extended page of ascension, of the stripe meandering the slope. We run through the slope on foot, the poem returns to the ground, the feet return to climbing, the voice returns to air, the bells return to the sky. We bleat." 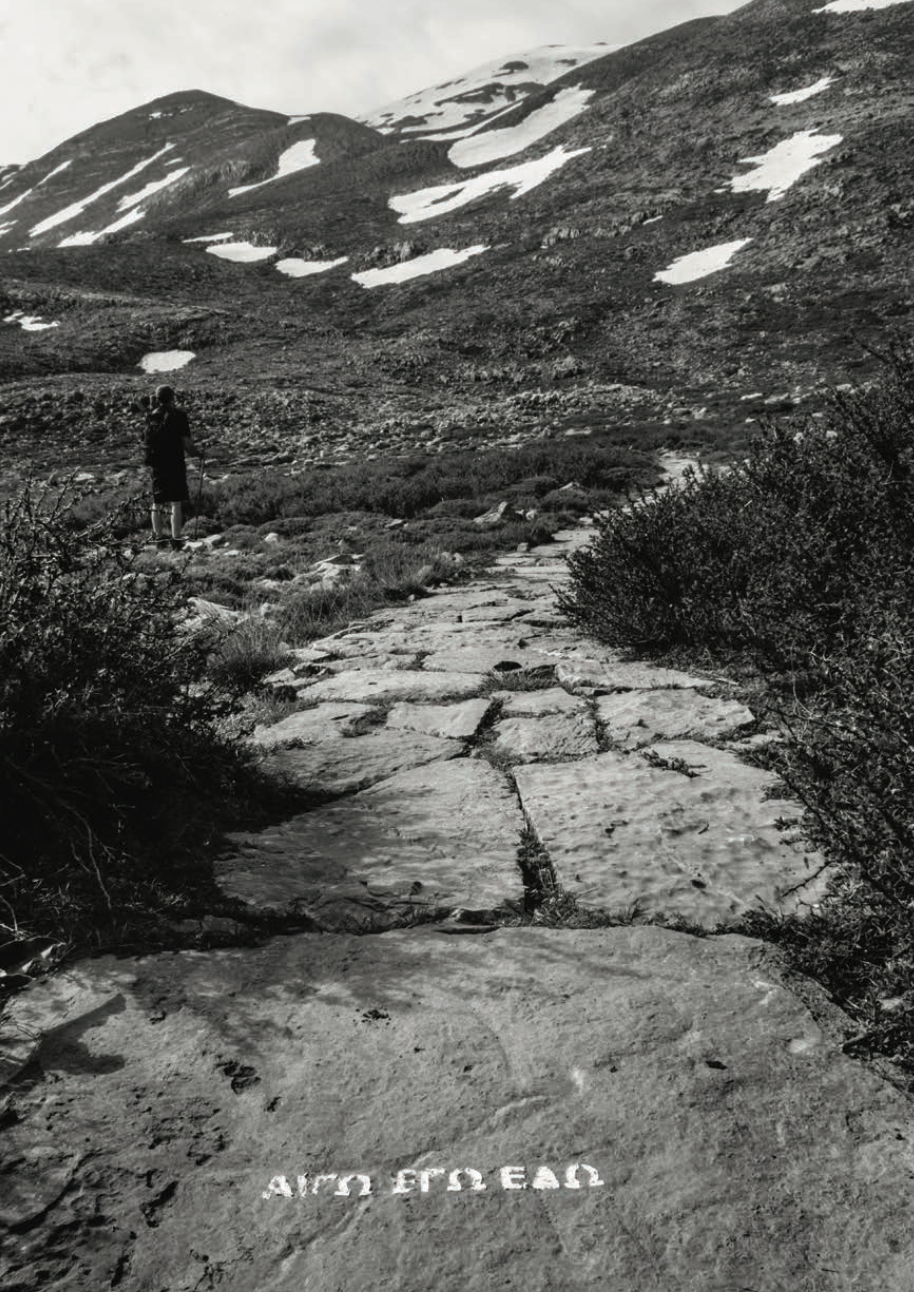 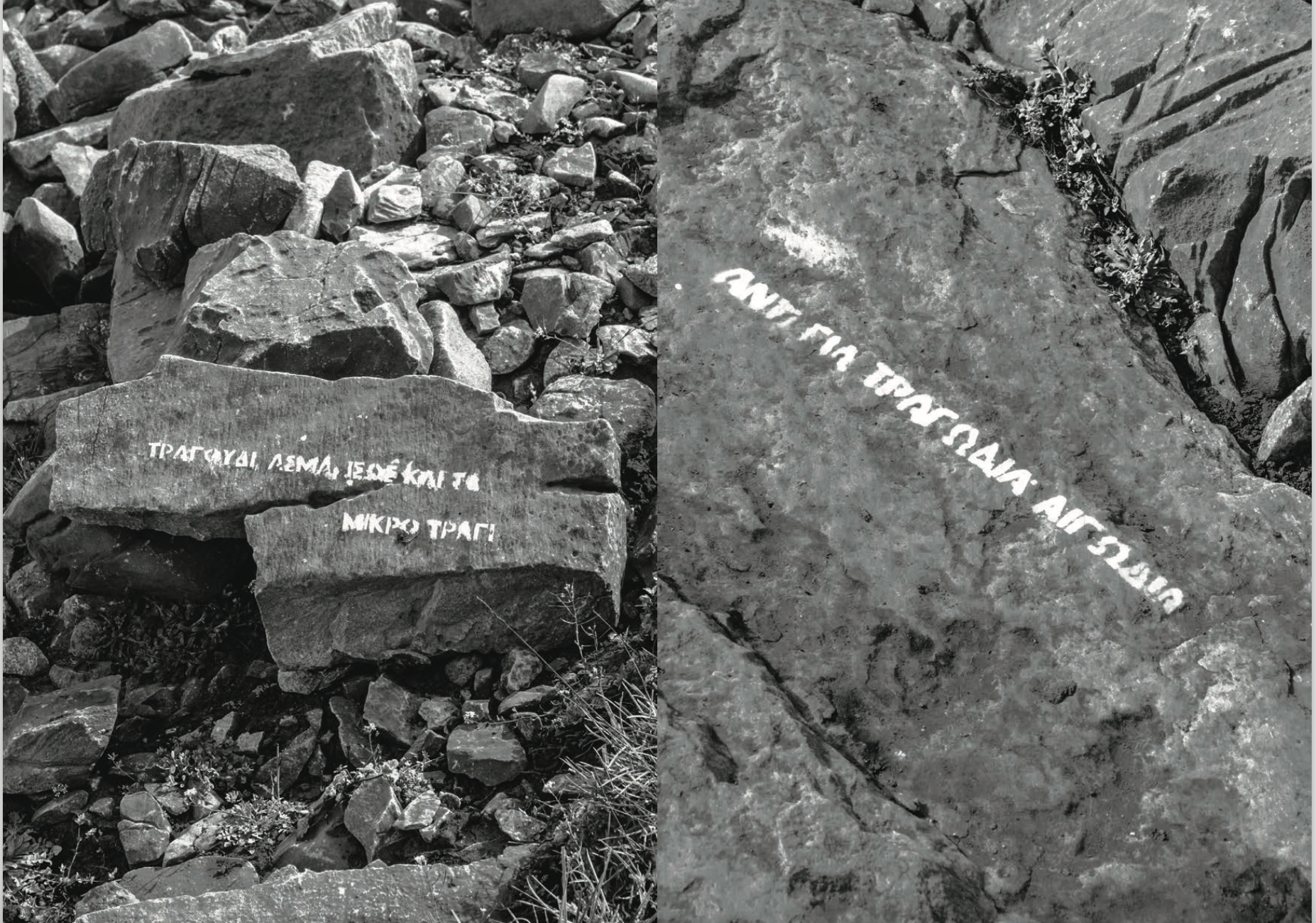 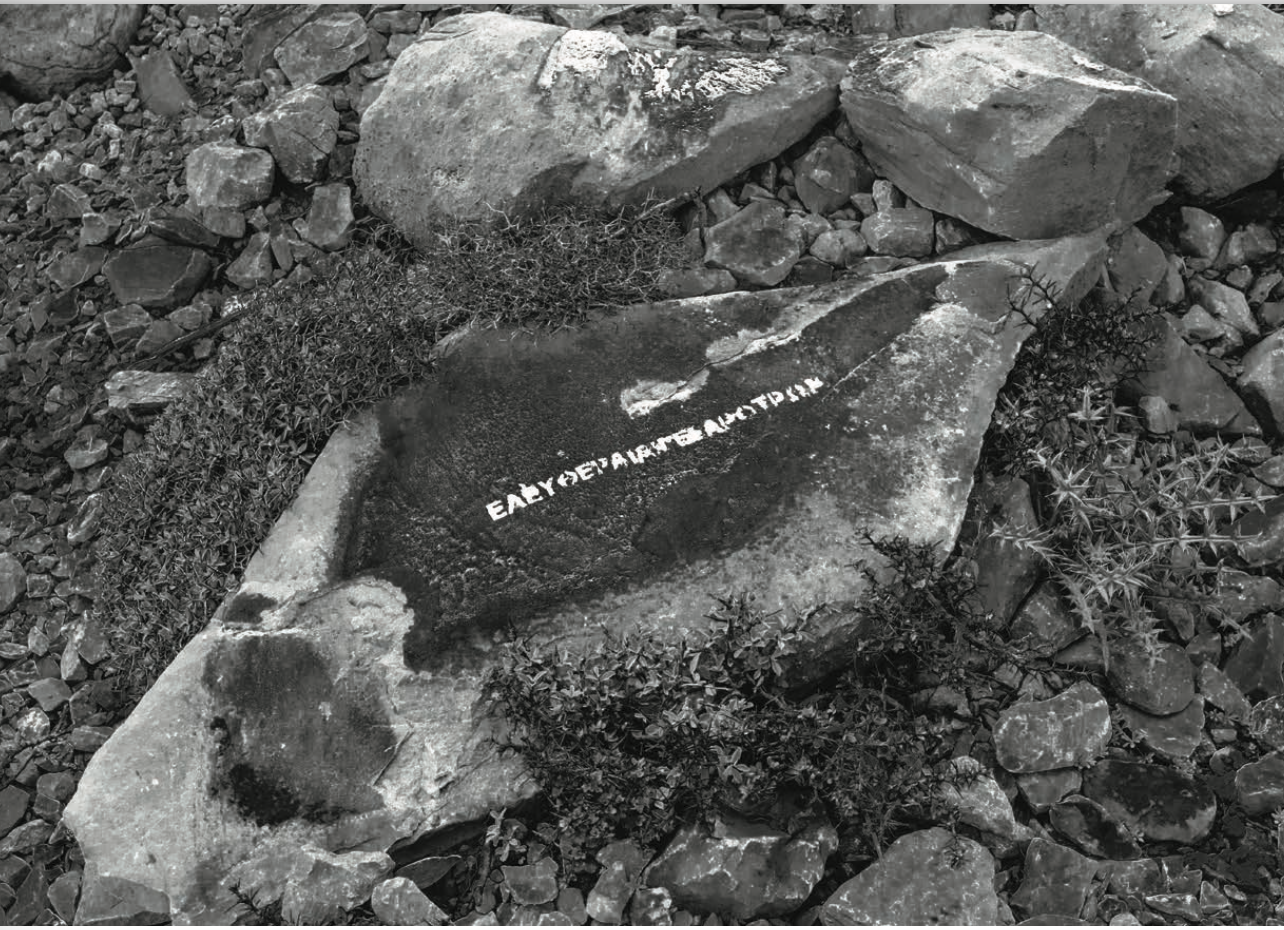 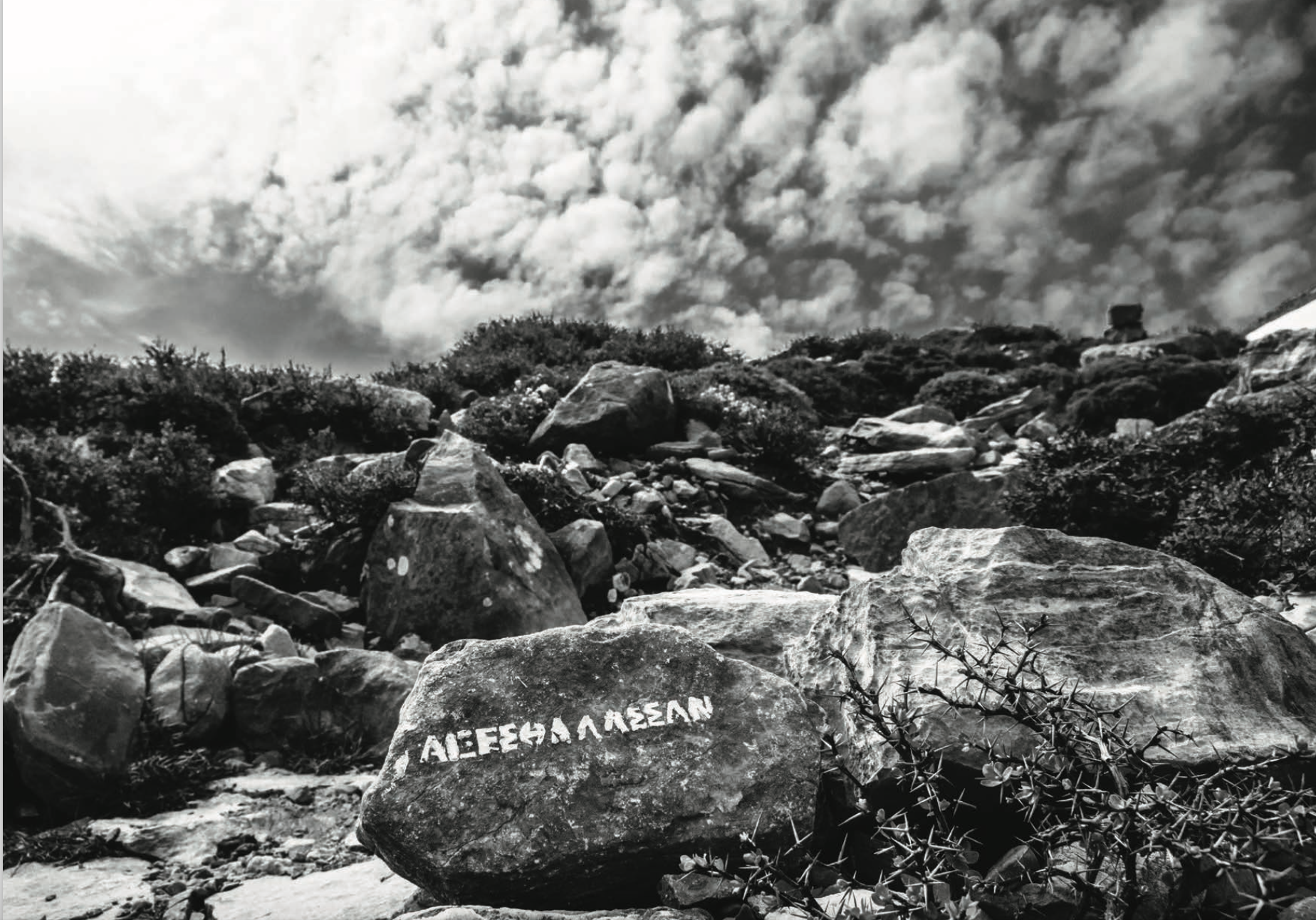 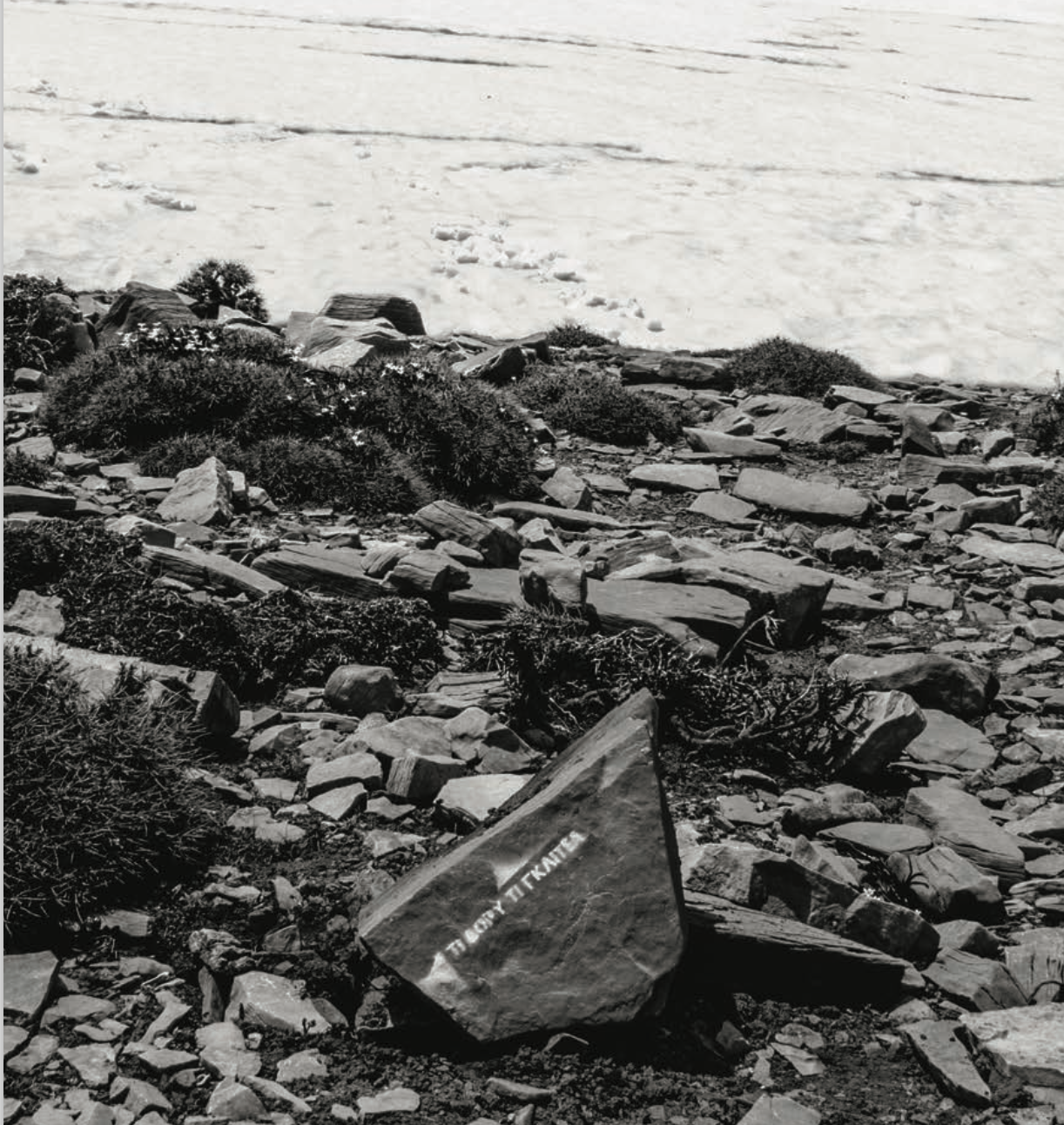