TETTIX (ΤΕΤΤΙΞ), the ancient Greek word for cicada, is the title of the new installation by the architect-poet Phoebe Giannisi. The installation was inspired by the association of the figure of the poet and the singing cicada as it appears through ancient Greek mythology, philosophy and poetry. More specifically the poet found inspiration in the fragment of Archilochus «τέττιγος ἐδράξω πτεροῦ» (a cicada by the wing) (Archilochus 223 West) and in an excerpt from Plato’s Phaedrus where Socrates narrates the origin of the cicadas (Platon, Phaedrus 259A-D).

The main element of the installation is an arrangement of hand written pages positioned on the top of 10 lecterns. By placing the manuscripts on the lecterns, an apparatus used for recitation, the poet emphasizes that the texts are destined for reading out loud. The viewer standing in front of the texts is standing in the position of the vocalizer. The manuscripts contain various texts such as recent poems of Phoebe Giannisi, Japanese Haiku, entomological descriptions and excerpts from ancient Greek poetry and philosophy. Giannisi’s translation and commentary inscribed in the margins of the pages offers new readings of classical texts in the context of the connection between cicadas, poetry and love which can be intuitively understood through the vocal recitation of the poetic word.

This relation is reflected in an original manner in By Heart Apparatus, 2012 which is presented in the installation space as a physical object and as a video documenting its use in a recent poetic performance in the island of Schinoussa. The By Heart Apparatus is a uniform for poets and, like a wearable lectern, allows them to place sheets of paper on a surface extending from their chest. Because of its semi-transparent material By Heart Apparatus reminds of a cicada nymph shed skin and, because of its shape, transforms the poet into a winged insect. This conceptual uniform counter proposes a reading “from the heart” to the practice of memorizing a text “by heart” by allowing the wearer to literary read a text from an extension of his/her chest.

The written, destined for recitation text, is supplemented from one additional translation in sound and image. A large sized video projection visualizes lyrics, entomological texts and scenes from Plato’s Phaedrus. The projection acts as the alternating summer scenery of the installation transferring the viewer into another place and season, in the position of the poet, the cicada and the spectator of poetic performances were the cicada literally replaces the poet’s voice.

In a video performance the poet stands with the head covered with a wicker basket, referencing the ancient Greek practice of trapping cicadas in small wicker baskets-cages. An oversized version of this basket is part of the installation and invites the viewer to imitate the poet and wear it on his/her head. The viewer who dares to get “imprisoned” in the darkness of the basket, in the place of the insect, will find him/herself in a personal soundscape where s/he can listen poems recited by Phoebe Giannisi mixed with song excerpts.

While the viewer temporarily looses his/her vision and hands his/her hearing to the poet, s/he loses contact with the time and space of the installation, without however, stop being part of it. The presence of the viewer activates and completes the installation by connecting, like the poet herself, the poetic word with the repetitive song of the cicada, making TETTIX an experiential poem. 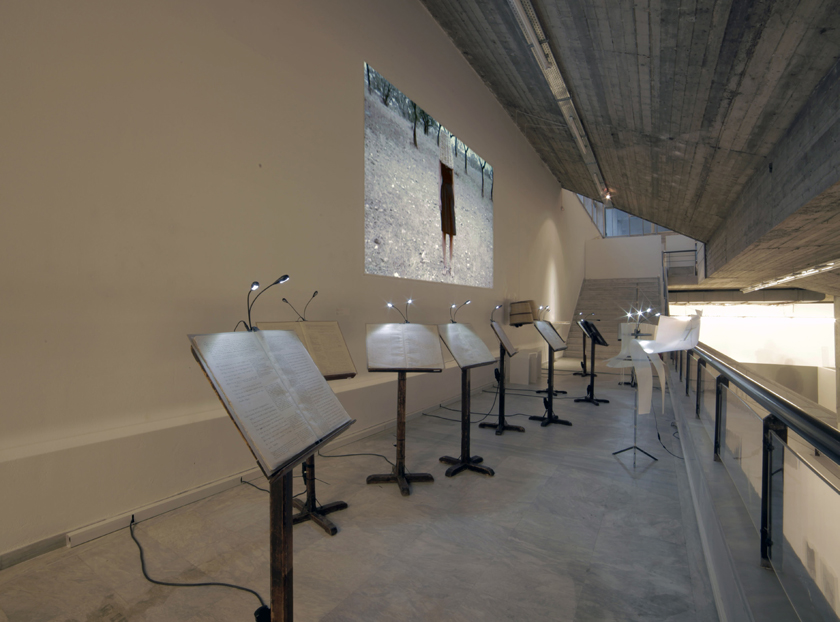 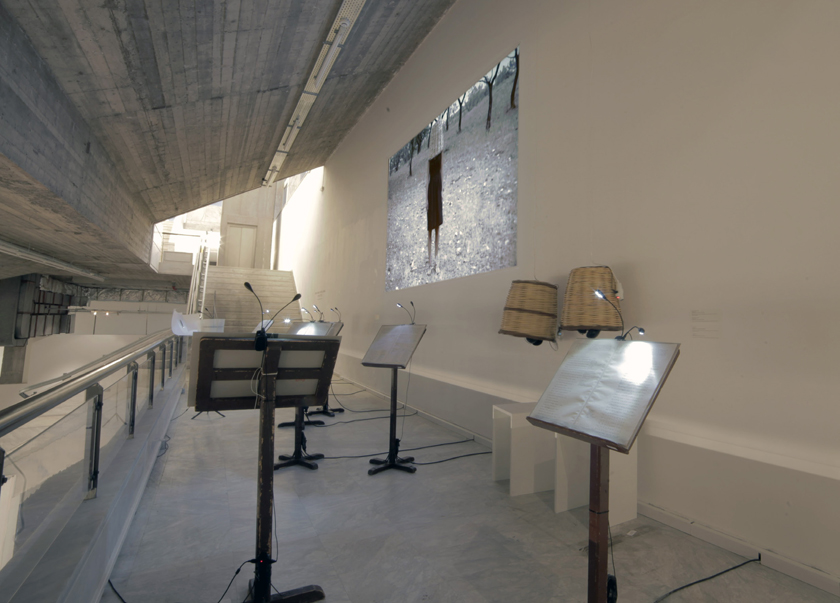 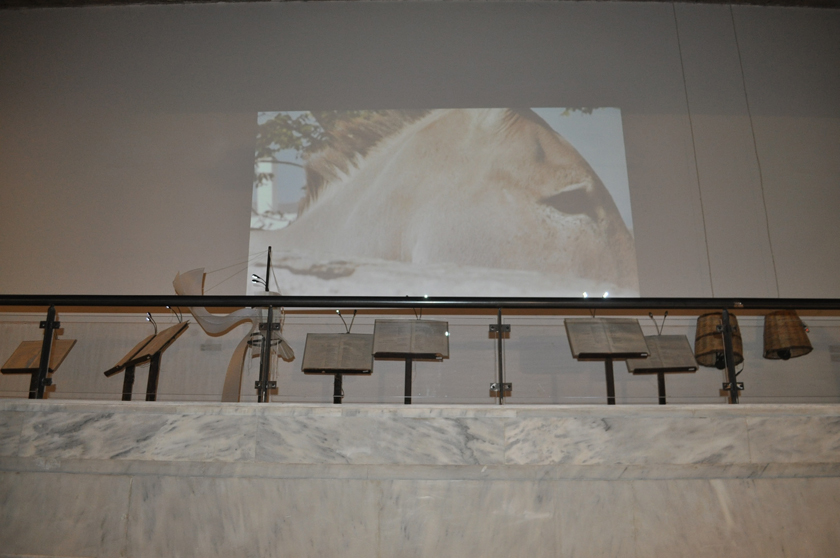 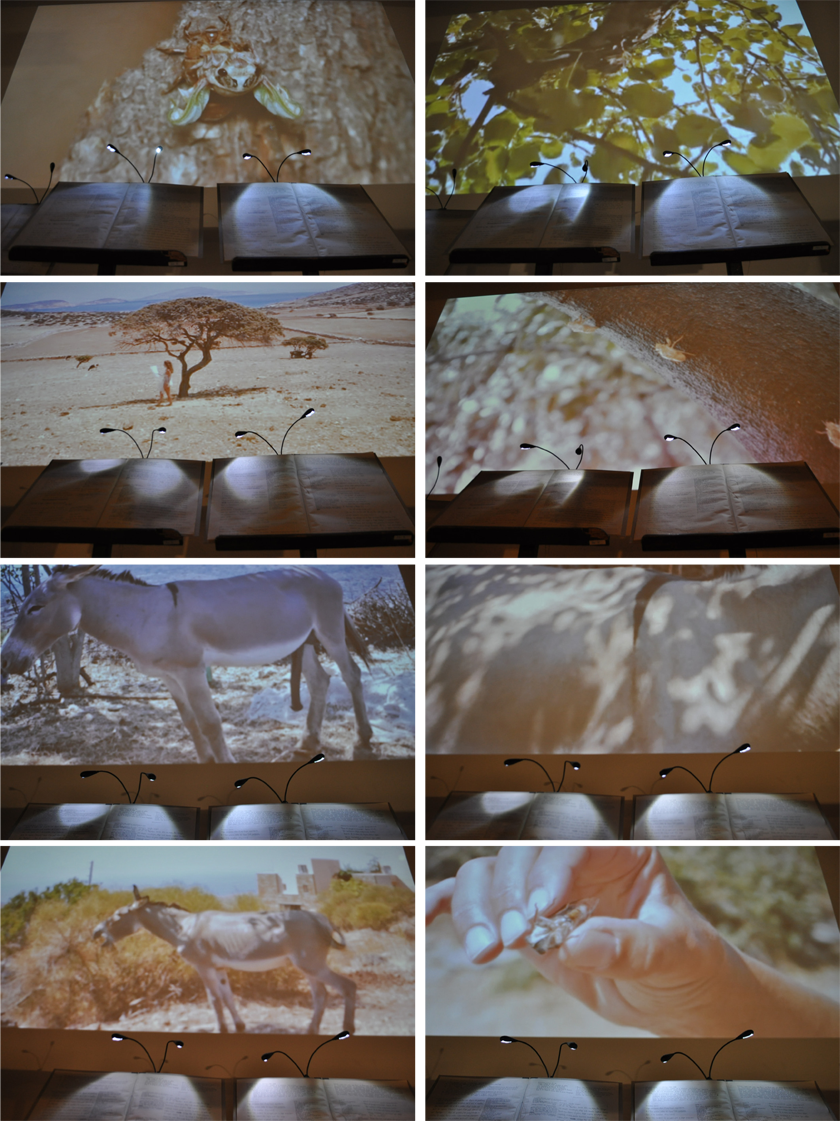 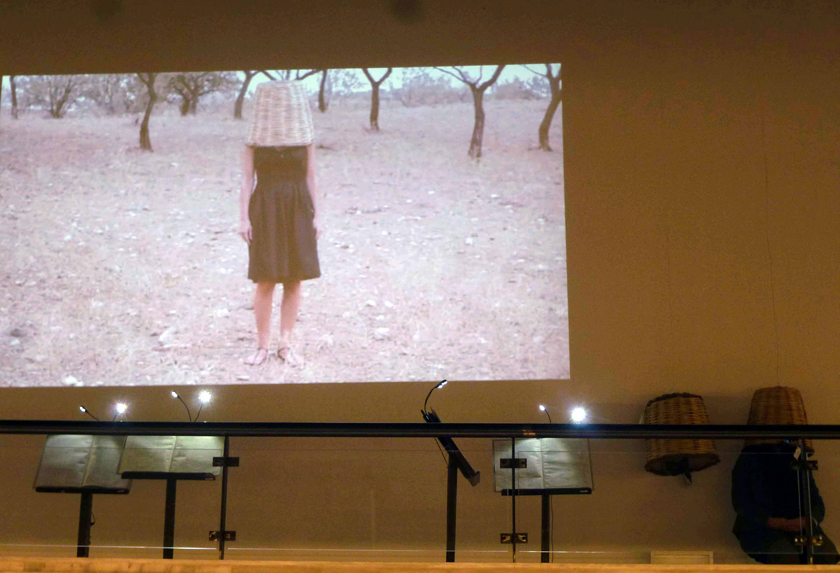 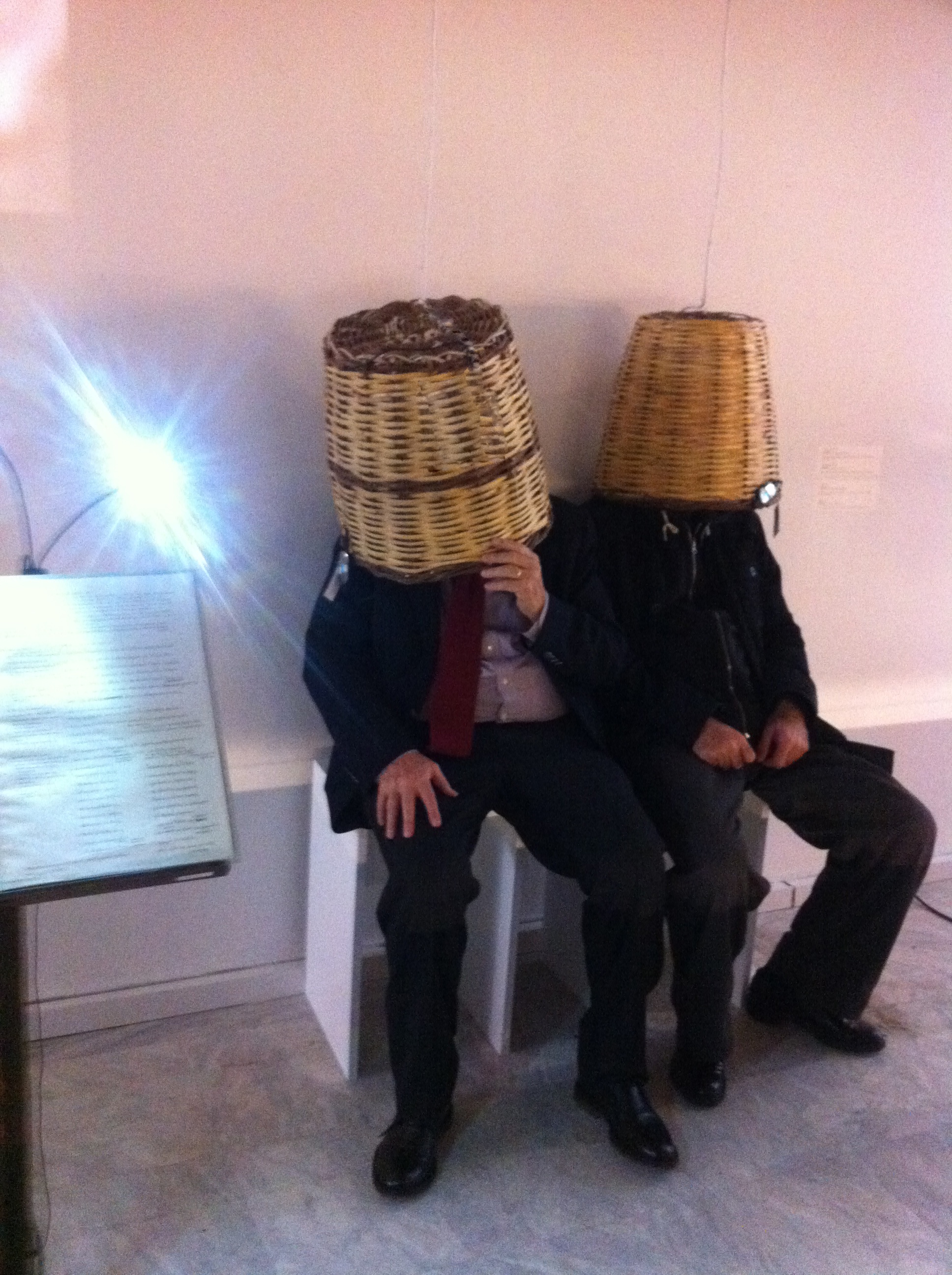 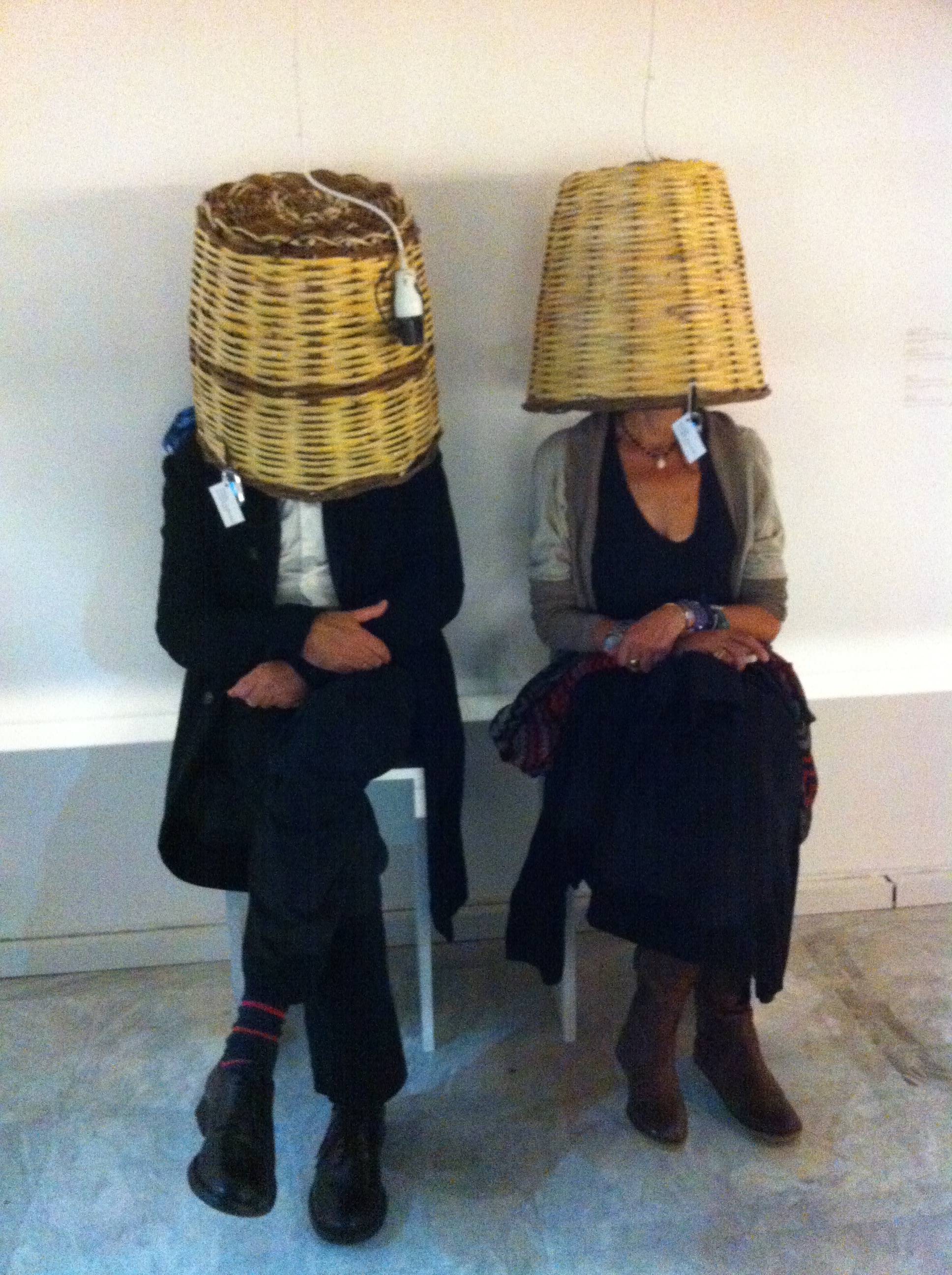 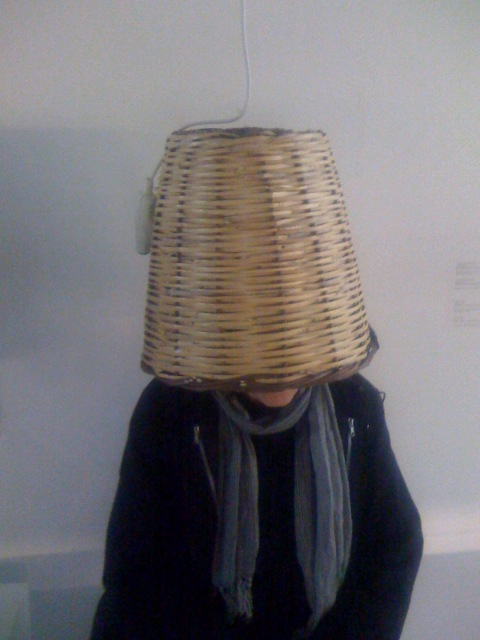