Phoebe Giannisi
Kernos: A Plate for all

Kernos: a plate for all is a food and audio installation at the living-room of Oscar Schlemmer, a contribution made by Phoebe Giannisi and Zissis Kotionis for the international exhibition Householding 2015 at the Masterhouses of Bauhaus-Dessau.

Kernos was an earth-vessel used in ancient Greece in mystic rites, carrying a variety of food offerings that were distributed to the participants. 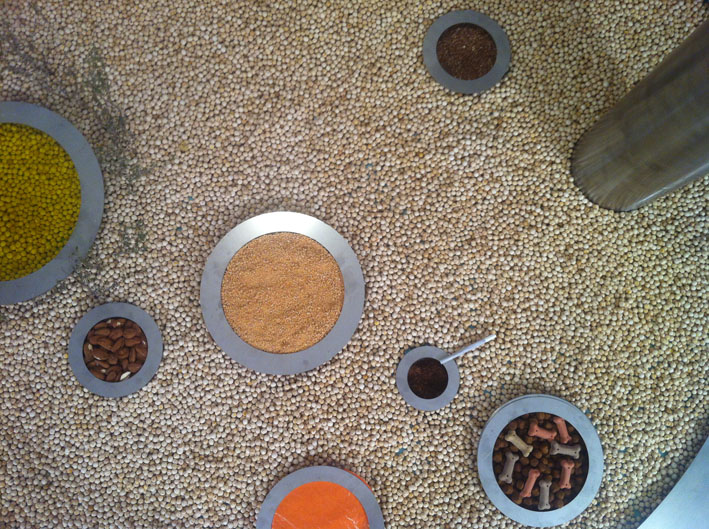 In this project the table becomes a common plate for all. It does not consist of a hard surface, but of a swallow container that encompasses a soft sensual food landscape, ready to be metabolized. The round table ring is made of stainless steel and it contains mainly roasted chickpeas and smaller vessels with olive-oil, honey, raki, bread, dog-food, bird-food, oregano, thym, mastiha, and an oil-lamp. The audio installation comprises 4 sound-works. These are composed by poetic and other texts in three mixed languages (greek, german, french and english) read on a background of sound recordings during a meal preparation or a meal consumption or even a festive lunch, and mixed with music. They represent abstract dialogues between the principal subjects/ingredients (Bread and Wine, Honey and Tobacco, Olive-Oil and the House, Chick-peas and Raki).

The round-table is a table for discussions, political, social or economic negotiations between different agents. Kernos is at the same time the object of these negotiations, food. Seen at an earth scale, the scale of the planet, it exemplifies the planet food economy, the scarcity of global ressources and the distribution of global food. But sitting at the same table and eating from the common food also creates com-panionship. Moreover, it mainly gives pleasure and raises the joy of conviviality.

This was what happened at the opening's eating performance.